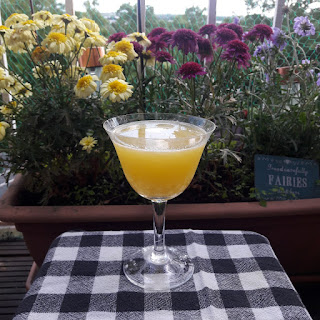 Start by making yourself a Bee's Knees cocktail, then choose any one of these awesome books to accompany it! Add the following ingredients into a shaker with lots of ice: 60ml gin, 25ml lemon juice, 15ml honey syrup, 10ml orange juice. Shake and strain into a glass. 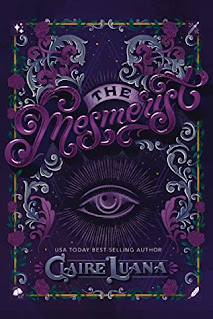 The Mesmerist by Claire Luana

Adrijana has always dreamed of leaving her small village and going to the palace, where her best friend Simeon is one of the princess's guards. However, when she and her father are persuaded to spend the evening there, they are embroiled in the murder of the queen and considered suspects.

Jana seems to have a special ability, but how rare and unusual is it? With everything that happens, it seems that only one of the Mesmers, can help her. So much mystery and intrigue, everyone seems suspicious and like Jana, I never knew who to trust.

There's just something so delightful about Claire Luana's writing, it's easy to fall straight into the worlds she creates. They are so rich and colourful, with such wonderful characters. 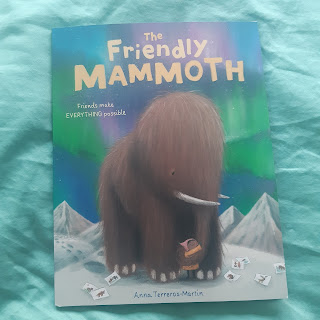 The Friendly Mammoth by Anna Terreros-Martin

Mansi shares my love of museums, but what she really wants is a friend to share things with. While drawing in the museum she finds herself in the past. The illustrations are beautiful and as much part of the story as the words are. Hopefully this can inspire lots of children to care about animals and the world around them. I learnt a few things myself, including that there was an elk whose antlers were each longer than I am tall! 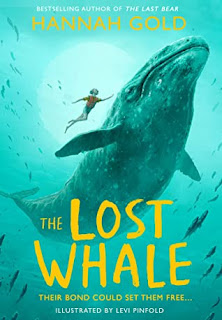 The Lost Whale by Hannah Gold

Rio has been sent to stay in California, with the grandmother he hardly knows, while his mother is in hospital for 4 weeks. At first he's scared of this new life, Rio has been the responsible adult in his family his whole life and doesn't really know how to let go and be a kid. But when he meets the ocean, everything changes.

I could share Rio's excitement and astonishment at learning about the whales and particularly White Beak, the first whale his mother ever saw. I felt like I was growing with Rio as he discovered more about the whales and the ocean, and also about himself. It was quite an emotional ride! I also loved the touch of magic in the book.

Without being at all preachy, this book gives a strong message to kids (and adults) to try to be more thoughtful about the world. It's scary how much humans are damaging the world and I want to do more to help. It has definitely inspired me to step up my efforts and make a few more changes in my life. 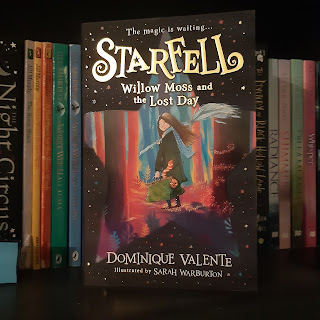 Willow Moss and the Lost Day by Dominique Valente

I really enjoyed the writing and the characters. Willow is an adorable character who you can't help loving. Quite downtrodden at home by her more powerful sisters, she's actually so brave and determined and ready to save the day.

It was a really lovely story. I liked the ending, though I feel it was a bit unfinished in some aspects, I suspect they may get picked up in later books. I've already bought book 2! 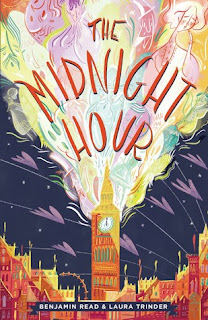 The midnight hour is a time and place where all the magic has been contained and the magical creatures and monsters can live safely, away from normal people. But this one place isn't enough for some of them, who want the daytime realm for their own too.

Emily has always thought she was too normal, if anything. Apart from having a totally bonkers, embarrassing mum, her Dad more than makes up for it by being the most boring person in the universe. However, Emily is very wrong! Her parents have been keeping some huge secrets from her and when they both go missing, she finds out about this amazing other world.

This book is written with such a wonderful sense of humour, I loved Emily and the Gob, which seems to have a life of its own.

Posted by Booktails at 10:50 No comments:

Spotlight on...
The Knave of Secrets by Alex Livingston 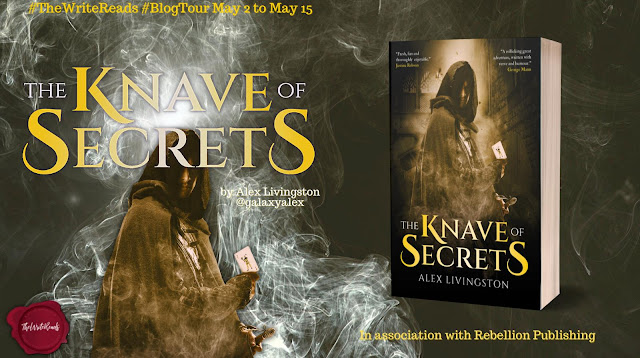 Today is the first day of the blog tour for The Knave of Secrets by Alex Livingston and I have a spotlight for you with all the information you need to know! UK publication date is 9th June 2022 and you can add it to Goodreads here. 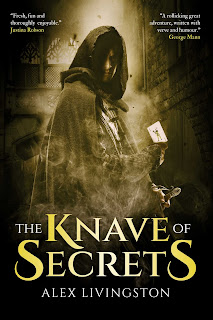 A twisty tale of magicians, con artists and card games, where secrets are traded and gambled like coin, for fans of The Lies of Locke Lamora and The Mask of Mirrors.

Never stake more than you can afford to lose.

When failed magician turned cardsharp Valen Quinol is given the chance to play in the Forbearance Game—the invitation-only tournament where players gamble with secrets—he can’t resist. Or refuse, for that matter, according to the petty gangster sponsoring his seat at the table. Valen beats the man he was sent to play, and wins the most valuable secret ever staked in the history of the tournament.

Now Valen and his motley crew are being hunted by thieves, gangsters, spies and wizards, all with their own reasons for wanting what’s in that envelope. It’s a game of nations where Valen doesn’t know all the rules or who all the players are, and can’t see all the moves. But he does know if the secret falls into the wrong hands, it could plunge the whole world into war…

Alex Livingston grew up in various quiet New England towns before moving to Buffalo, NY to study English at Canisius College. He writes SFF prose and interactive fiction. Alex is married and lives in an old house with his brilliant wife and a pile of aged videogame systems. 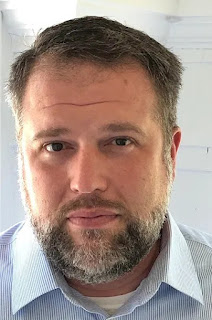 Posted by Booktails at 11:35 No comments: 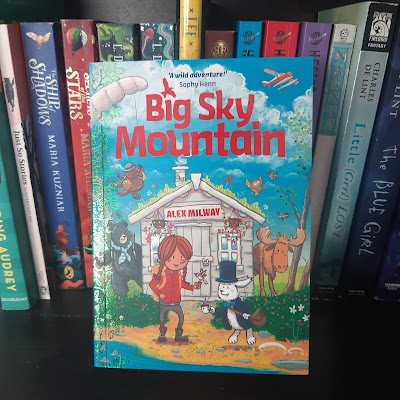 Until now, Rosa has always lived in a city, but unfortunate circumstances mean that she has to move to Big Sky Mountain to live with her grandmother. At first she is nervous about the move and has doubts about this new life and her stern grandmother who doesn't seem to know her. But Rosa soon discovers the wonderful feeling of being free!

I don't blame Grandma Nan for wanting to live on Big Sky Mountain, it sounds like a fantastic place to live! Gold River, Jewel Lake, Eagle Heights and lots of friendly (and some not so friendly) talking animals! 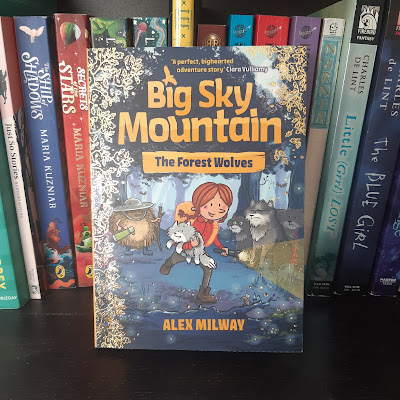 Rosa has settled well into life at Big Sky Mountain and is getting on well with Grandma Nan. There's just one type of animal that Rosa hasn't met yet and all the others are afraid of... the wolves. The cute little terrified animal that comes barrelling into their lives really doesn't seem anything like the scary, vicious wolves she's heard about. Rosa loves having the baby wolf around but Grandma Nan knows they should help her find her family rather than keep her.

This was another thrilling adventure on Big Sky Mountain, introducing more of the animals that live around the mountain.

I really liked the two tone illustrations in both books and the lovely map at the start. At the end there are scavenger hunts to search for some of the plants in the illustrations throughout the book. The books definitely made me want to be outdoors in the fresh air more and practice being a mountain girl like Rosa!

No trip to Big Sky Mountain would be complete without a refreshing beverage! I've chosen a Blue Sky cocktail which matches the colour of the sky in the books. 30ml each of gin, blue curacao, lemon juice, 20ml of maraschino. Shake with ice and strain into a cocktail glass. 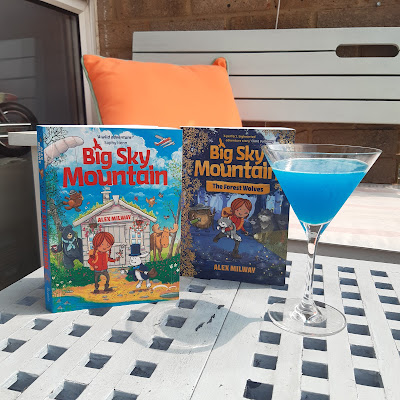 Posted by Booktails at 17:10 No comments:

The Royal Leap-Frog by Peter Bently 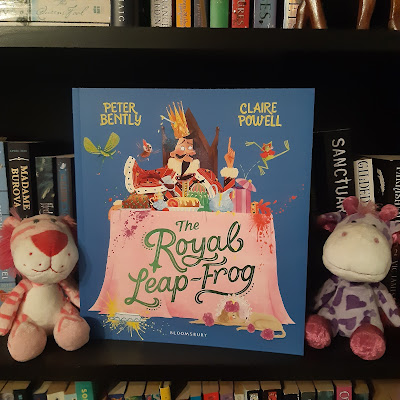 A hilarious tale of rivalry, boasting and custardy chaos from the bestselling creators of The King's Birthday Suit.

I don't usually review picture books on the blog but this one caught my eye and just looked so adorable!

I loved the illustrations and the story is so funny, with an exceptionally clever frog. This is sure to be a favourite with the kids. I had a look at the author's website and was intrigued by Goldilocks in Space and Snow White in Space. Space is my thing so definitely want to check those out too!

I've Kissed Too Many Frogs Cocktail - I found this on the Martini Diva website, well worth a look for lots of other fun cocktails! 45ml Lemon Vodka, 15ml Orange Liqueur, 75ml Fresh Grapefruit Juice, 15ml Fresh Lime Juice, Splash of Grenadine. Shake the first 4 ingredients in a shaker with ice, pour into a martini glass and drizzle over a little grenadine. 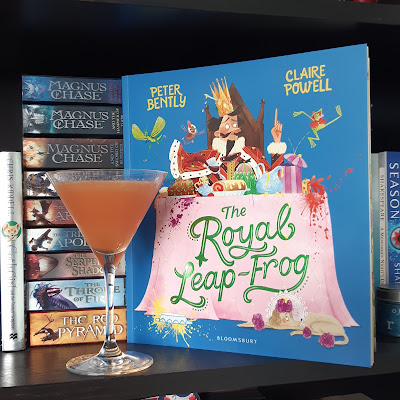 Posted by Booktails at 12:26 No comments:

Turn the lights on. Lock the door. Things are about to get SERIOUSLY SCARY!

The brand new must-read middle-grade novel from the author of super-spooky Crater Lake. Perfect for 9+ fans of R.L.Stine’s Goosebumps

It's basically the worst school detention ever. When classmates (but not mate-mates) Hallie, Angelo, Gustav and Naira are forced to come to school on a SATURDAY, they think things can’t get much worse. But they’re wrong. Things are about to get seriously scary.

What has dragged their teacher underground? Why do the creepy caretakers keeping humming the tune to Itsy Bitsy Spider? And what horrors lurk in the shadows, getting stronger and meaner every minute…? Cut off from help and in danger each time they touch the ground, the gang’s only hope is to work together. But it’s no coincidence that they're all there on detention. Someone has been watching and plotting and is out for revenge… 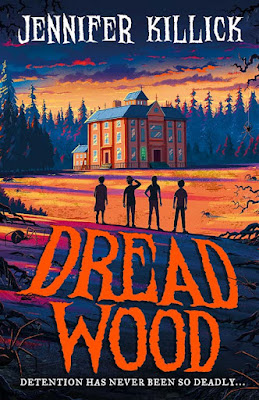 Four very different kids get detention. They seemingly have nothing in common, in fact for some of them it is extremely out of character! At first it seems like it's going to be the usual tedious detention, all four kids just keeping themselves to themselves. Then their teacher disappears and its like they have found themselves in a horror movie. And then it gets REALLY creepy!

Imagine Dread Wood being the name of your school, that alone is enough to let you know this is going to be CREEPY. This is the kind of book you want to read huddled up on the sofa, wrapped in a blanket and clutching your teddy bear for protection.

I loved all four of the main characters, despite them definitely NOT being friends at the start, they all had great qualities and I could see them growing to care about each other and the way they learn to work together is impressive. Then there's the Latchitts, perfect horror movie villains. It was completely gripping, I constantly had to stop myself from jumping ahead to find out what would happen next. I enjoyed reading this so much, scary, funny and intriguing all at once. I've heard rumours of a sequel and I am crossing my fingers that they are true.

Dread Wood was published a couple of days ago so if you haven't got your copy yet, what are you waiting for???

Of course the cocktail to go with this book has to involve spiders, but don't worry, no spiders have been harmed in the making of this review! To make a Gin Spider, start by filling a tall glass with ice. Pour in 45ml gin, a dash of Angostura bitters and top up with ginger ale. Simple but tasty. Maybe throwing a few of these at the spiders might keep them at bay! 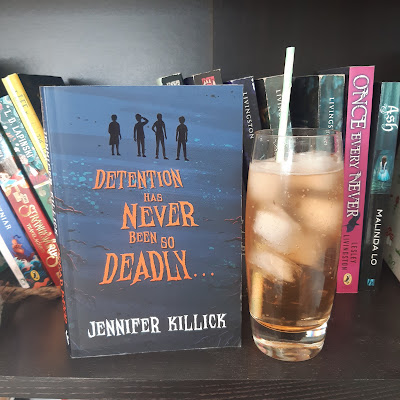 Posted by Booktails at 16:12 No comments: