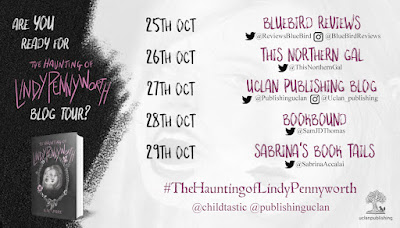 Just in time for Halloween, I am closing off the Lindy Pennyworth blog tour and I have a wonderful author interview for you!

I am writing this in an old notebook that I found in the common room. Every word is true. I can speak to the dead. And they can speak to me...

After the death of her father, Lindy falls headlong into a state of grief and no longer understands her place in the world. Through paranormal rituals, Ouija boards and spiritualist churches, Lindy attempts to speak to her father beyond the grave – but to no avail. That is until she receives a ‘visit’ from Esme, her Victorian ancestor, who reveals that her family is under a curse that separates them in the afterlife.

Determined to break it, Lindy sacrifices her grip on reality. But not everyone wants her to succeed. There are still secrets that fight to remain buried... 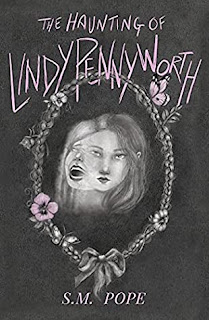 This book has such a fantastic start - "I am sane. I can speak to the dead. And they can speak to me." It really sets it up well and gets you hooked on what's to come. Lindy's story is so fantastical that almost no one believes her, least of all her mum. But can she trust the one person who actually does seem to believe? And can she trust the ghosts? Even as the reader, you find yourself wondering what is true. This was a perfect book for this time of year with all the creepy ghosts and the ending actually left me gasping! Now read on for the interview, as I'm sure that's what you're really waiting for.

What attracted you to ghost stories, have you always been interested in ghosts and psychic abilities?

I can't remember the first time I became fascinated in ghosts and the supernatural, but I was always desperate to look around any and every graveyard I encountered when I visited my grandparents on holiday here in the UK, when I was still living in Canada. We didn't have such old cemeteries and I found it incredible that you could stand in front of something so old and read about the person buried beneath. In my teens, I visited a medium with my mother - we went as a kind of a dare, a bit of fun, but we both came away absolutely shocked by how much she said about both of us without knowing anything about us. She told me things I'd never said to anyone before about myself - stuff that surpassed the usual 'you will pass your GCSEs' ,'you will fall in love' etc. A couple of not very nice predictions also came true which was scary for me and unsettling. She said I was an 'old soul' and had psychic abilities if I ever wished to develop them. (I haven't, though I am curious!)

I am not saying I believe in all mediums and clairvoyants, though. I had a five-minute, three-card Tarot reading with a bored-looking woman in Covent Garden, who apparently had read Richard Gere's future, and everything she said was absolute garbage!

Are any of the characters drawn from people you know?

No, not entirely. All authors say that their characters are composites of people they know and I agree that this can happen. I think that Lindy has characteristics of myself, but so does her mother - because I am a daughter and a mother! Writing Lindy was the hardest thing I have ever had to do, to be honest. I think that in early drafts I saw her as an extension of myself and therefore I could not settle on how to portray her. Would she be downtrodden or feisty? Acquiescent or stubborn? Early readers of my first drafts (including the author Melvin Burgess, who gave me a masterclass as part of my MA!) picked up on this hesitancy. It took a couple of years and many revisions to settle on this version of her.

Did you have to do a lot of research into the 1800s and the cholera epidemic? Is that a period of history that always interested you?

I don't know why but I have always been drawn to the Victorian era. I love the literature from that time, especially the Romantic poets, Charles Dickens, Jane Austen (she just about squeezes into it!), Henry James, Mary Shelley, the Gothic, etc. For me, what is so appealing is the stark juxtaposition of those who were trying to rationalise everything into scientific explanations, and those who were clamouring to protect the natural world and insist that mankind could not dominate it. This is seen most clearly in Shelley's Frankenstein - the Dr is so determined to go against the laws of nature and produce something incredible - but it eventually turns against him because you can't mess with nature. So, you've got a lot of fascinating developments in science going on alongside writers, like MR James, who are trying to scare people silly with stories that defy all reason.

The idea for my story came about after reading about the Victorian art of making mourning jewellery out of a deceased person's hair. It disgusted me somewhat but it was fascinating, too. I then started wondering about what would happen if this memento mori would act as a conduit for the dead to communicate with the living, and I decided to explore that through a link between a girl in the present day and one in the past. I did lots of research on Victorian Oxford - the cholera plagues, how and where they started and what happened, newspaper articles from that time. I also visited the two graveyards mentioned in the book - they were created to help deal with the increasing number of dead people due to cholera outbreaks. The hardest thing is ensuring that the parts in which the Victorians speak sound genuine and not too stilted and of course not too modern!

I'm trying to stay spoiler free here, but that ending!!! Did you always plan to have that epilogue? And will there be a sequel?

At first I had a different ending - it's hard to explain without giving it all away! And then the current one came to me and I thought it would be a better fit. As for a sequel, I'd quite like to develop the story but it depends on how well this sells!

Finally, what is your all-time favourite cocktail?

It should be a Bloody Mary but I absolutely love a well-made Margarita.

Well, fingers crossed we get a sequel and here is a recipe for what I think is a very well-made Margarita! Since it's Halloween I've decided to try out a Blood Orange Margarita. Take a shaker and fill with ice. Add a shot of tequila, 1/2 shots of Cointreau, blood orange juice and lime juice, dash of Campari and dash of sugar syrup. Shake well and pour into a glass with a salt rim. 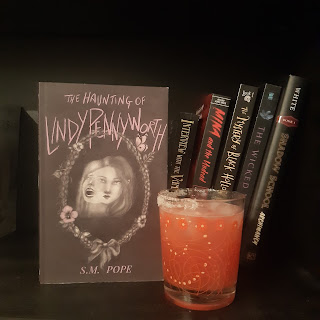